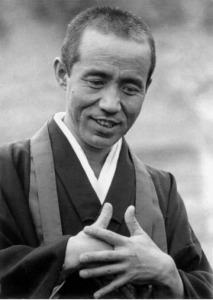 Born February 1, 1938, into the Otogawa family of priests in Niigata Prefecture, Kobun grew up in his father’s Soto Zen Temple, Jokoji, in Kamo, Japan. His early childhood was influenced by war, financially hard times, and his father’s death when Kobun was eight years old. He was ordained at age twelve, and adopted by a nearby priest in town, Hozan Koei Chino Roshi.
Kobun did his undergraduate studies at Komazawa University, and then received a Master’s degree in Mahayana Buddhism from Kyoto University in 1965. The following year he was given dharma transmission by Chino Roshi.  In 1967, after training at Eiheiji Monastery, Kobun was engaged in training new students when he received an invitation from Suzuki Roshi to help create a Soto Zen monastery in America. Although his adopted father and master, Chino Roshi, objected, Kobun first happily came to America to San Francisco Zen Center in 1968.
Because of Suzuki Roshi’s declining health, Kobun took over responsibility for the Los Altos offshoot of Zen Center, Haiku Zendo, which little sangha had paid for Kobun’s passage several years before. He settled in Los Altos around the corner from the zendo with his wife and children, and by 1979 had established the sangha as Bodhi, and a search was made for a larger practice place.
Two places were found, one in Mt. View, which became Kannon-do, and in which Les Kaye Roshi was installed by Kobun, the second was a Quaker High School in the Santa Cruz Mountains which became Jikoji in 1983, and in 1984 was registered in Japan as a Soto Zen Temple, and in California as a retreat and educational center.
Soon Kobun Chino became known as a traveling teacher, as he divided his time between Jikoji and Hokoji, which was established soon after in New Mexico. He later, with his Swiss student Vanja Palmers, helped create new practice places in Austria, Germany and Switzerland. He also had a special relationship with Chogyam Trungpa Rinpoche, and taught at Shambala, and Naropa University in Colorado. He was established as World Wisdom Chair at Naropa months before he died on July 29, 2002 in a drowning accident.
His death occurred at the mountain home of his Dharma heir, Vanja Palmers, in
Switzerland. Maya, Kobun’s five-year old daughter, fell from a dock where the 3 children were playing over a small backyard pool. Kobun tried to save her and they both died in the icy mountain water.
Kobun and Maya’s ashes are divided among the many places where he taught, and his influence on Zen understanding and practice in the West, and also in Japan, will continue to clarify and encourage Zen practice for the ages to come.
Angie Boissevain was undergoing transmission when Kobun died, and was officially transmitted at Jikoji in 2004 by Vanja Palmers, along with Carolyn Atkinson and Jean Leyshon.

More about Kobun at http://www.kobun-sama.org/ and at his Wikipedia entry